Kiwi-Americana
We have embarked on a life-long journey to become a family. In June 2013, we have brought home two beautiful babies. Our family is now complete and our marriage formally recognized by state and federal laws.

I'm so psyched about this!

So, there has been quite a stir, and perceived or real fear going around the globe, about the Ministry of Home Affairs recent guideline issued in July 2012 and disseminated to Indian consular agencies and embassies in December 2012. I did my own research and downloaded the ICMR ART Bill 2010 as well as the ICMR ART Rule 2010. I found that in fact the "new" guideline violates the language set forth by the ICMR ART Bill 2010. Please download the documents here (click on the "Draft" link under Guidelines): http://www.icmr.nic.in/icmrnews/art/art.htm

Below is the language that very much contradicts the "new" guideline publicized by the Ministry of Home Affairs.

I. Bill 2010, page 29, Chapter VII, RIGHTS AND DUTIES OF PATIENTS, DONORS, SURROGATES AND CHILDREN, Section 32, clearly states that:
(1) Subject to the provisions of this Act and the rules and regulations made

thereunder, assisted reproductive technology shall be available to all
persons including single persons, married couples and unmarried
couples.

(2) In case assisted reproductive technology is used by a married or unmarried
couple, there must be informed consent from both the parties.

II. Bill 2010, page 33, Section 35, clearly states that:
(2) A child born to unmarried couple through the use of assisted reproductive technology, with the consent of both the parties, shall be the legitimate child of both parties.

**From my understanding, the "new" guideline is using page 38, Chapter IX, MISCELLANEOUS, Section 48,  in order to "discriminate" against same-sex couples or unmarried couples, and single individuals. Here is the bill's language:

Power of the Central Government to make rules –


(1) The Central Government may make rules for carrying out the provisions of this Act.

(2) In particular, and without prejudice to the generality of the foregoing power, such rules may provide for --

**You may use the above information to challenge the inconsistency this "new" guideline has created (perhaps with the help of a lawyer, if necessary) -- but then again, they could always change the rules. One good thing about the current situation is that there is no wording on Chap. IX that mentions anything about the Central Government making new rules or guidelines that "supersede" what is currently on the bill. If the Ministry says that the "new" guideline follows what is on the bill, then it must not contradict the bill's intent and wording. Also, who is the "Central Government"? Is it the "Ministry" of something? Somehow, I doubt that the definition of Central Government in this bill is merely the "Ministry" of something. Unfortunately, the bill did not explicitly define "Central Government" on Chap. 1, Clause 2 (Definitions). Nevertheless, I believe that legally, this "new" guideline can be challenged!


Chapter I, Clause 2 (h) “couple”, means two persons living together and having a sexual relationship that is legal in India.
Note: Homosexuality has been ruled legal by the Delhi High Court in July 2009.

Chapter I, Clause 2 (v) of the Assisted Reproductive Technology (Regulation) Bill 2010 provides definition of “married couple”, means two persons whose marriage is legal in the country / countries of which they are citizens;

Chapter I, Clause 2 (dd) of the Assisted Reproductive Technology (Regulation) Bill 2010 provides definition of “unmarried couple”, means two persons, both of marriageable age, living together with mutual consent but without getting married, in a relationship that is legal in the country / countries of which they are citizens;

Chapter VII, Clause 32 of the Assisted Reproductive Technology (Regulation) Bill 2010 provides,“Rights and duties of patients – (1) Subject to the provisions of this Act and the rules and regulations made thereunder, assisted reproductive technology shall be available to all persons including single persons, married couples and unmarried couples.”

Chapter VII, Clause 34 (19) of the Assisted Reproductive Technology (Regulation) Bill 2010provides “…..a letter from either the embassy of the Country in India or from the foreign ministry of the Country, clearly and unambiguously stating that (a) the country permits surrogacy, and (b) the child born through surrogacy in India, will be permitted entry in the Country as a biological child of the commissioning couple/individual) that the party would be able to take the child / children born through surrogacy, including where the embryo was a consequence of donation of an oocyte or sperm, outside of India to the country of the party’s origin or residence as the case may be……” 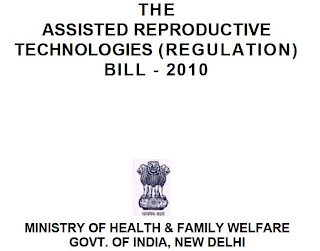 Our Surrogacy Clinic in New Delhi